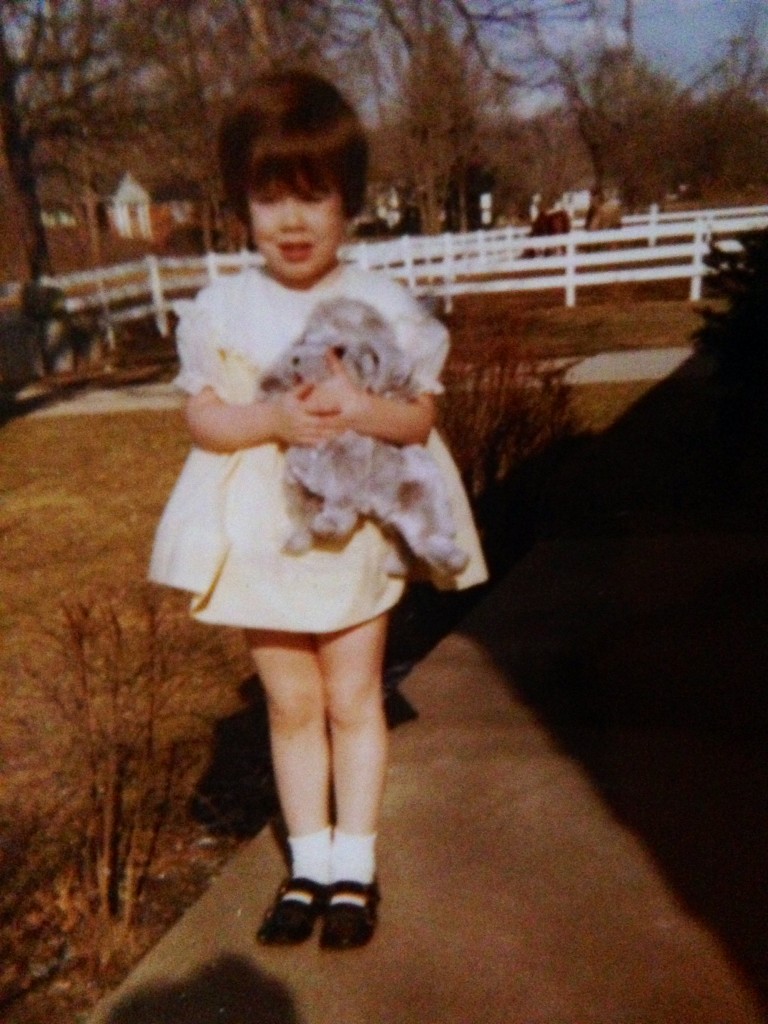 That’s me on the front porch of the Melrose house in 1971. It must have been Easter or something. I wasn’t normally so fancy.

I played alone for hours outside the house where I grew up in Southfield, Michigan, daydreaming on the swing set or exploring the pastures and back woods, acting out books and creating my own worlds. A barn on the property housed several horses, and one of its three pastures doubled as a vegetable garden, which I helped my Uncle Lincoln plant and tend each summer. The modest ranch house with a screened-in carport anchored two acres of land, but it sat close to the gravel road, its doors always open to the stoppers-by who regularly bellied up to my Aunt Thelma’s table. Her kitchen smelled of coffee, cigarettes and bacon grease, a combination of odors that thirty-some years later still reminds me of home.

I left the house on Melrose at age 11 to move in with my father and his new wife, but I can still picture the kitchen table, where my aunt sat in her white quilted bathrobe, smoking cigarettes and writing letters, while Patsy Cline sang softly on the transistor radio. I can see my bedroom window at night, a bright light beckoning from an apartment building on Lahser Road, and hear the soothing hum of a train passing in the distance. I recall the gilded mirror with a photograph of a boy playing cowboys and Indians that hung on the wall of the rec room, or “rumpus room,” as my aunt and uncle called it. I remember the cobalt blue candy dish in the living room filled with butterscotches, which my uncle let me eat before dinner when my aunt wasn’t looking.

Whenever I dream of going home, even now, it is to that house.

With the holidays approaching, the Melrose house and my childhood there are on my mind more than ever. It was in that house that I knew safety, comfort and stability after losing my mother as a toddler. It was there that I discovered the importance of tradition and the meaning of family. It was there that I felt the unconditional love of two people who were my aunt and uncle but also my parents. And it was there that I unwittingly learned how to be a mother and make a house a home.

I miss my aunt and uncle, and the Melrose house, the most this time of year. An industrial park now stretches across their property, their house long since razed. Uncle Lincoln, my second father and best buddy, passed away when I was pregnant with my son, who is now 14. Aunt Thelma, the only mother I ever knew, died two years ago, four days before Christmas. As anyone who has lost one or both parent knows, there is something hollow and unsettling about spending the holidays without them, even if you have a family of your own and no matter how much time passes.

Although there is nothing left of my childhood home, I like to think it lives on through the life my time there helped me find. After the tumultuous teenage years I spent with my father and stepmother, I wandered lost and miserable through my early twenties. I was looking for something, I guess, but I had no idea what. When I met my husband, a quiet, thoughtful man much like my Uncle Lincoln, I realized all I ever wanted was what I had in that ranch house on the gravel road in Southfield: to feel safe and loved.

I’ll be home for Christmas. I am already there.