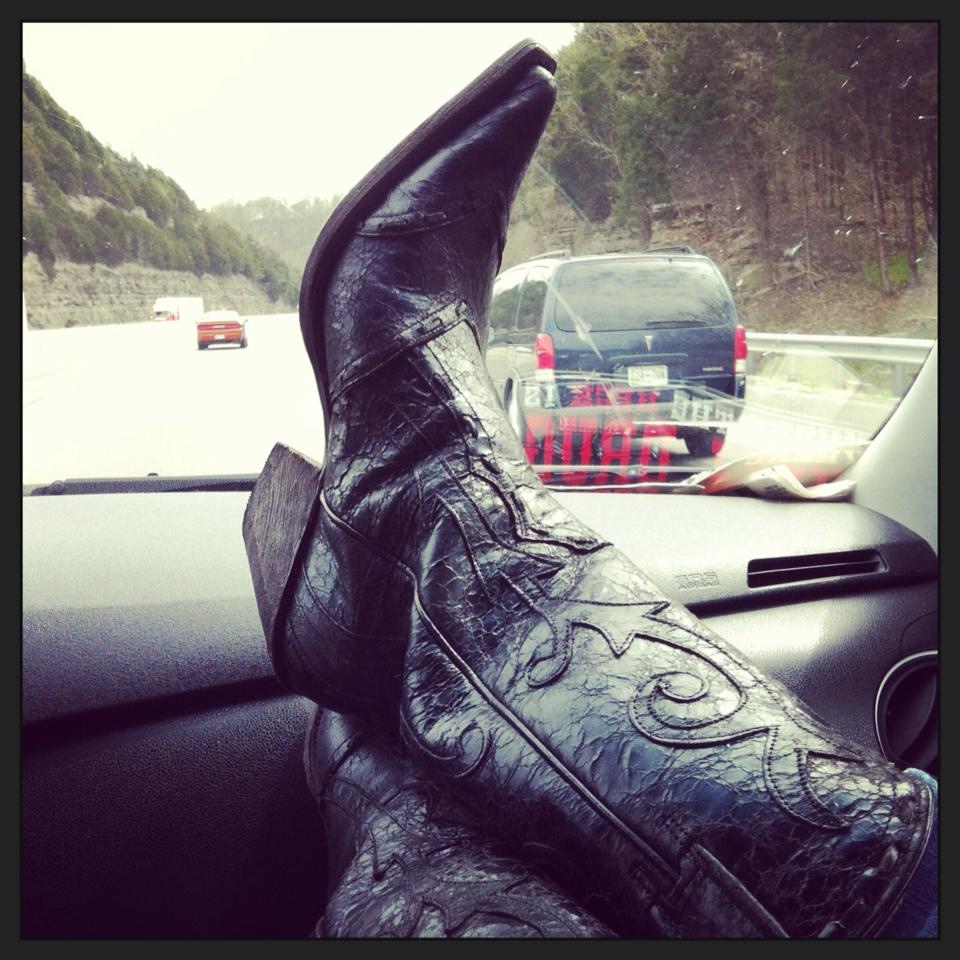 I bought my first pair of cowboy boots in the seventh grade. It was 1980, the year “Urban Cowboy” was released, and western boots were a must for any budding fashionista. I saved for weeks to buy those boots, hoarding my allowance and babysitting, which I hated, to earn extra cash. My stepmother said I had champagne taste and a beer budget. Being only 12, I didn’t understand what that meant. All I knew was that the fawn-colored pigskin suede boots with white leather flowers cost $75, and I had to have them.

Thirty some years later, I still remember how proud I was when I plucked those boots off the shelf at the Scott Colburn western store in Livonia, Michigan, and handed my money to the cashier. They were a symbol of my individuality and confidence, and I wore the hell out of them. I wore them with leg warmers and prairie skirts; I tucked my jeans into them. I wore them till they needed new soles and were beyond out of style. And then one day I packed them away on a closet shelf and forgot them.

The Southern road trip my family took last week made me remember those long-lost boots and the strong, self-assured girl who wore them. After a lengthy monologue in which I ruminated over situations I cannot control, my husband set me straight in the lobby bar of the Peabody Hotel. “It’s a big world,” he said. “If you don’t like who’s in that corner of it, move to a different one.” What we don’t want to hear is often what needs to be said most. He was right: It was time to dust off my self-confidence and stop being a victim.

As we wandered down Broadway in Nashville a few afternoons later, I found myself as drawn to the western stores as the honky-tonks. I tried on boot after boot, but the perfect pair eluded me. The next day, an hour before we left town, I headed back to the first store we had visited to try on the boots I liked most. The fit wasn’t right, and the toes were too square. Disappointed, I looked for a larger size and noticed a pair I hadn’t seen the day before. They were exactly what I wanted: black, distressed leather with low heels and sharply pointed toes. They fit perfectly.

I wore my new boots out of the store and on the drive home from Nashville, and I have been wearing them ever since — to a party, to the grocery store, even in the carpool line at school. When I look down at them, I feel a wave of pleasure and pride. Like the flowered pair I bought in seventh grade, my new boots are a symbol of my individuality and confidence. But more important, they remind me of the much-needed earful I got in Memphis and my decision to leave my blues there, where they belong.