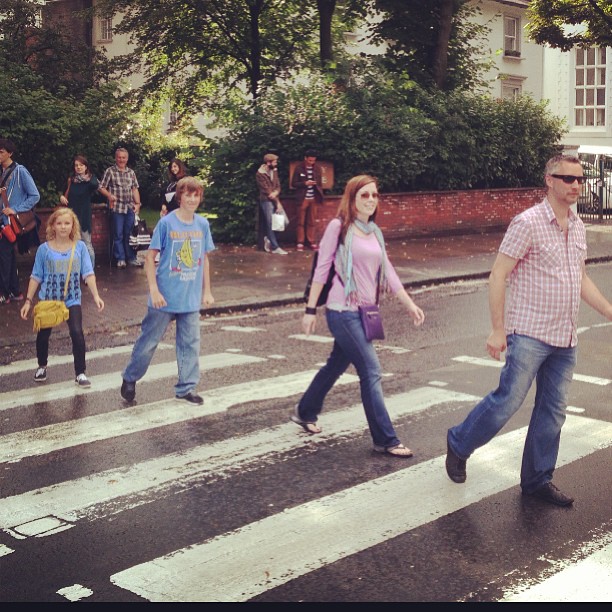 But how could I not check in at Abbey Road on Facebook and Instagram us crossing it?

On our family’s first trip to Disney World, when Facebook was just a baby and Instagram did not even exist, I saw a father videotaping his children on the Animal Kingdom safari ride. His family was sitting directly in front of mine, and I remember being fascinated by this dad and his video camera. He was so busy trying to preserve the moment that he did not appear to be enjoying it at all. I wondered why he didn’t just snap a quick photograph instead of spending the entire ride behind the camera. Wouldn’t it be better to be a part of the memory by experiencing the event, to be a participant in the adventure rather than just its chronicler?

In my twenties, watching a breathtaking sunset on Lake Michigan, I remember wishing out loud for a camera to capture its beauty. A wise friend said, “I don’t need a camera. My memory of it is better.” I guess he was right because I still remember how that sunset made me feel. A photo would not have done the moment justice.

I wonder what that long lost friend would think about Instagram. I doubt he even has a Facebook account. But I, like that dad at Disney so long ago, sometimes find myself a chronicler of rather than a participant in my life. I spend a lot of time capturing moments on Facebook and Instagram, especially when we travel. I use social media as my scrapbook and photo album, checking in on Facebook to record the names of restaurants, landmarks and historic sites we visit. I write status updates about the day’s itinerary and post photos as we move from place to place to help myself remember the sequence of our journey. But if I press the pause button to capture a moment on Facebook or Instagram, am I enhancing it or diminishing it? Does my obsession with preserving a memory keep me from truly being part of it?

On a recent family ski trip, I decided to find out by taking a break from social media and simply enjoying the moments as they happened. It was our first visit to Colorado, and I wanted to fully embrace its landscape and culture, which are so different from what we know in the Midwest. I took photos here and there, but I didn’t Instagram them. I ate delicious meals, but I didn’t check in at any restaurants on Facebook. Instead, I disconnected from my online persona for a few days and reconnected with my real world self and my family. What I found was that I liked being a participant rather than a chronicler. Posting the photos of our journey on social media could wait until after we were home. I wanted to experience it first.

That social media-free trip inspired me to take a break from my personal Facebook account. I have a page where I promote this blog and share links, and that will remain active. But I am taking some time off from posting on my own page to reassess how I use social media in general. Maybe Twitter is a better forum for my random thoughts. Maybe Instagram is a more appropriate place for my food and travel photos. I am not sure what the right balance is, but I do know that constantly sharing my personal musings, photos and whereabouts with 478 people, many of whom I haven’t spoken to in years or barely know, is beginning to feel off-kilter. Do any of them care what I ate for lunch at Le Fumoir on the way to the Louvre? Do they need to see a photo of my family crossing Abbey Road? Do they know I am just excited about my travels and not bragging about them? That last question in particular has been haunting me lately.

I’m only five days into my Facebook sabbatical. Considering how poorly I did the last time I attempted a social media dryout, my success is not imminent. So far, though, I’m happy to be living in the moment instead of wondering how to hashtag it. I’ll keep you posted on my progress. But don’t expect a status update.

Are you a social media junkie? How do you find a balance between life online and ITRW?

Update: Well, this probably comes as no surprise, but my “anti-social experiment” failed miserably after just 15 days. I did learn some valuable lessons, though. For instance, Facebook makes it pretty difficult for bloggers to get any traction without advertising. I knew this, of course, but it was frustrating to see it play out. When I made updates about new blog posts on my Michigan Left fan page, no one saw them. But more important than that, I missed the people I actually do interact with on Facebook. Working from home, FB is kind of like my water cooler. It’s fun to take a break and socialize. I just need to limit myself more, so I can stay focused. We will see how that goes. Stay tuned.

If this one sounds familiar, that’s because it originally ran March 28, 2012. I edited and reposted it for this week’s Yeah Write Challenge.

I gave up social media for Lent this year, and I’m sure it comes as no surprise to anyone who knows me that it didn’t last. Let’s face it: I am a Facebook junkie. I like to “check in.” I like to “like” things. When I go a day without updating my status, people text me to make sure I’m OK. That last part probably sounds like an exaggeration, but sadly it is true.

Inspired by my husband, who gives up alcohol every year for Lent, I decided to try some clean living of my own. For 46 days (actually 40 because Sundays don’t count during Lent), I would give up Bejeweled Blitz (I am embarrassed to admit how much time I spent matching and detonating jewels); checking in (how would anyone know about the fun places I visited?); and updating my status (almost unthinkable for someone who has as much to say as I do).

Since I am not Catholic, I figured I would make my own rules and start Lent early. On Feb. 8, I announced my intentions publicly, via status update, of course. My friends wished me well and offered words of encouragement. One went so far as to send me a sympathy card the first week. No, I’m not making that up.

Somehow this perpetual Facebooker managed to quit cold turkey. For an entire week I did not take a single peek at my page or anyone else’s.

All was well until I realized that an email address I desperately needed was only available to me on Facebook. I knew I’d be cheating if I ventured back to the dark side and, although I may not be Catholic, I am prone to overwhelming guilt. So I signed on, got the email and admitted my lapse in a status update. I also said a quick hello because Lent hadn’t officially started and the temptation to let my 416 friends know how much I missed them was more than I could bear — even if most of them probably had no idea I had left Facebook in the first place.

Hoping it would be an isolated slip-up, I climbed back on the wagon. Again, I lasted about a week. This time I felt the overwhelming need to brag about my options guru husband, who had made an appearance on Fox Business News. It was a really big day for him, and he is not one to boast about his accomplishments. Someone had to do it for him, right?

By the time Fat Tuesday rolled around I knew I was in serious trouble. Giving up Bejeweled Blitz was nothing. It was going without the social interaction that was doing me in. So I deleted the Facebook app from my iPhone, and I deactivated my account.

I did pretty well initially. I logged in on two separate Sundays (the Catholic Church says they don’t count, remember?), but I deactivated my account before Monday, when Lent resumes.

Then I was faced with the mother of all tests of my addiction: My daughter, a fifth grader, won an essay contest. As her mom, I would have been proud of this regardless. But as a professional editor and on-again, off-again writer, I was thrilled. I had to let my friends know. I just had to. So I signed on to my dog’s account (yes, my Yorkshire Terrier, Rosebud, has her own Facebook page), and I sang my daughter’s praises. Rosebud only has 38 friends on Facebook, but, hey, it was something.

It was a Friday, not a Sunday, and I was on Facebook posing as my dog. I knew I had reached a true low point, so I gave up and reactivated my own account. Lent, for me, was officially over two weeks early. 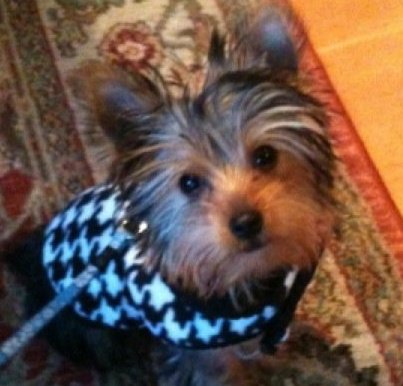 Am I embarrassed that I couldn’t last the full 40 days? A little. But I’m proud too. Although I’m a miserable failure at making Lenten sacrifices, I did accomplish what I had set out to do during my Facebook sabbatical: I started this blog.

After months of thinking and talking about it, of agonizing over putting myself out there and writing again, I did it. And I’m pretty proud of myself, broken Lenten promise or not.

I’m not sure where this journey is going to take me, but I’ll be sure to keep everyone posted in my Facebook status updates. Oh, and for the record, my husband is still happily on the wagon.