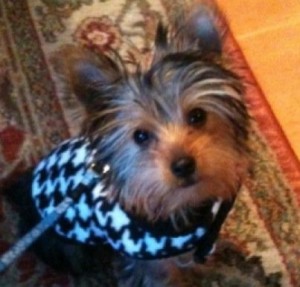 Our dog, Rosebud, the unsuspecting victim of Facebook identity theft

I gave up social media for Lent this year, and I’m sure it comes as no surprise to anyone who knows me that it didn’t last. Let’s face it: I am a Facebook junkie. I like to “check in.” I like to “like” things. When I go a day without updating my status, people text me to make sure I’m OK. That last part probably sounds like an exaggeration, but sadly it is true.

Inspired by my husband, who gives up alcohol every year for Lent, I decided to try some clean living of my own. For 46 days (actually 40 because Sundays don’t count during Lent), I would give up Bejeweled Blitz (I am embarrassed to admit how much time I spent matching and detonating jewels); checking in (how would anyone know about the fun places I visited?); and updating my status (almost unthinkable for someone who has as much to say as I do).

Since I am not Catholic, I figured I would make my own rules and start Lent early. On Feb. 8, I announced my intentions publicly (via status update, of course). My friends wished me well and offered words of encouragement. One went so far as to send me a sympathy card the first week (no, I’m not making that up).

Somehow this perpetual Facebooker managed to quit cold turkey. For an entire week I did not take a single peek at my page or anyone else’s.

All was well until I realized that an email address I desperately needed was only available to me on Facebook. I knew I’d be cheating if I ventured back to the dark side and, although I may not be Catholic, I am prone to overwhelming guilt. So I signed on, got the email and admitted my lapse in a status update. I also said a quick hello because Lent hadn’t officially started and the temptation to let my 416 friends know how much I missed them was more than I could bear (even if most of them probably had no idea I had left Facebook in the first place).

Hoping it would be an isolated slip-up, I climbed back on the wagon. Again, I lasted about a week. This time I felt the overwhelming need to brag about my options guru husband, who had made an appearance on Fox Business News. It was a really big day for him, and he is not one to boast about his accomplishments. Someone had to do it for him, right?

By the time Fat Tuesday rolled around I knew I was in serious trouble. Giving up Bejeweled Blitz was nothing. It was going without the social interaction that was doing me in. So I deleted the Facebook app from my iPhone, and I deactivated my account.

I did pretty well initially. I logged in on two separate Sundays (the Catholic Church says they don’t count, remember?), but I deactivated my account before Monday, when Lent resumes.

Then I was faced with the mother of all tests of my addiction: My daughter, a fifth grader, won an essay contest. As her mom, I would have been proud of this regardless. But as a professional editor and on-again, off-again writer, I was thrilled. I had to let my friends know. I just had to. So I signed on to my dog’s account (yes, my Yorkshire Terrier, Rosebud, has her own Facebook page), and I sang my daughter’s praises. Rosebud only has 38 friends on Facebook, but, hey, it was something.

It was a Friday, not a Sunday, and I was on Facebook posing as my dog. I knew I had reached a true low point, so I gave up and reactivated my own account. Lent, for me, was officially over two weeks early.

Am I embarrassed that I couldn’t last the full 40 days? A little. But I’m proud too. Although I’m a miserable failure at making Lenten sacrifices (again, I’m not even Catholic), I did accomplish what I had set out to do during my Facebook sabbatical: I started this blog.

After months of thinking and talking about it, of agonizing over putting myself out there and writing again, I did it. And I’m pretty proud of myself, broken Lenten promise or not.

I’m not sure where this journey is going to take me, but I’ll be sure to keep everyone posted in my Facebook status updates. Oh, and for the record, my husband is still happily on the wagon.