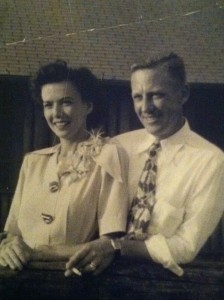 As a child, I walked next to him with my tiny hand wrapped around his giant index finger. I listened to him chuckle softly at his own jokes. I ran to him when my aunt, the disciplinarian, scolded me, and I sobbed on his shoulder. He was my uncle, but he was also my second dad. He loved me unconditionally, as if I were his own daughter, and he showed me what a father should be.

I went to live with Uncle Lincoln and Aunt Thelma, my father’s older sister, shortly before my mother’s death. They were in their fifties and had already raised their own two children and numerous foster kids. Their decision to take on a toddler at that stage of their lives is just one example of the loving, nurturing, selfless people they both were.

Uncle Linc was my buddy growing up. I adored him. He walked me to the bus stop each morning with our collie, Chipper. I worked with him in his vegetable garden, planting row after row of sweet corn, cucumbers and leaf lettuce. I helped him feed and water our horse, Blue Betty. When a new Disney movie came out, he took me to the Westborn Theater, which he managed, and I sat happily in the back row munching on Raisinets.

When I was 11, my father remarried and I moved in with him and my stepmother. My dad was a stoic, distant man. I knew he loved me, but it was not easy for him to show it. My teen years with my stepmom were tough, and my dad was no Uncle Lincoln.

In my early ’20s, I spent a fair amount of time dating the wrong men. I found myself drawn to troubled, enigmatic types, guys like my dad. That changed when I moved to Chicago and met the rock star (not really, but he is in a band). Our first date lasted 24 hours, and I had never felt more at home with anyone. Within six weeks we were living together, and this year we’ll celebrate our 16th wedding anniversary.

What made him the right guy? After years of dating men like my father, I finally found an Uncle Lincoln. He laughs at his own jokes. He holds me together when I’m falling apart. He loves me unconditionally.

When I took the rock star home to meet my family, my father, a retired Detroit police officer, sat him down in the kitchen with a yellow legal pad and grilled him about his education, employment and family. When we went to visit Uncle Lincoln, he and my future husband sat outside in a couple of lawn chairs and had a casual, quiet conversation. I love both these memories. My two dads looking out for me and making sure I’d found a good guy.

It took time, distance and having my own family to repair my relationship with my dad. I had to become a parent to recognize what he had been through — World War II, being a police officer, losing his wife — and how it had affected him. Both my dads are gone now, and I miss them every day.

As I watch my own little girl unabashedly favor her father over me, it tickles me. I know she is bonding with the most important man in her life, and he is showing her what a father should be. He is her example. I hope she’ll find someone just like him some day, just like him and Uncle Lincoln. 56 thoughts on “Memories of the Men Who Raised Me”