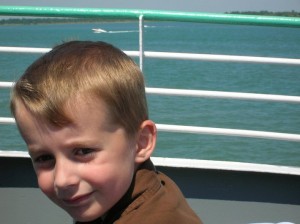 My sweet little guy, contemplating the universe, at age 6

My firstborn will turn 13 in less than a month, and let’s just say his attitude toward me has soured a bit in recent weeks. What once would have been a simple dialogue about what time he should leave for the bus turns into an all-out argument. My “suggestion” that navy blue and black do not go together is met with a dramatic roll of the eyes and a very audible sigh.

(Disclaimer No. 1: I feel it is my duty to intervene when the men in my life make fashion mistakes. I am certainly no fashionista — I purchase most of my clothes en route to the checkout at Target — but I know a blatant “don’t” when I see one. Plus, his father used to wear white tennis shoes in public, and he doesn’t even play tennis. Someone has to stop the cycle.)

The eyeroll-sigh combo is not something with which I am unfamiliar. My 11-year-old daughter, whom I adore (Disclaimer No. 2), has been shooting looks and stomping her feet since she was 3 (or was it 2?). But my son, the sweet angel boy who worships the ground I walk on? This is definitely new for him, and I don’t like it one bit.

Believe me, I understand teen angst. I was quite salty and rebellious in my teenage days (my husband might argue that some things never change). At 11, during the summer before seventh grade, I moved in with my father and new stepmother. My father and I hadn’t lived together since my mother died when I was a toddler, and my stepmom was 28 years old and had no children of her own. My teen years were a bumpy ride, to say the least.

Because it was such a particularly stressful period in my life, I kept a daily journal (there were no blogs in the late ’70s, folks). I guess that is part of why I remember it so vividly. I felt hurt, angry, resentful and unequivocally misunderstood. And so, as I remind myself constantly, I get this. I know what my son is going through, at least from the female perspective of being a teenager. But as his mother, it doesn’t make it any easier.

What gets me more than the bad attitude is that I just plain don’t want him to grow up. I’m not ready and don’t think I ever will be. So every once in a while, when I catch a glimpse of my sweet little boy in my almost teenager, I greedily gobble up the memory.

The other night, when he came home from swim practice, he bounded into the living room with his arms wide open and a big smile on his face. “How’s my favorite lady in the whole world doing?” he said, and gave me a bear hug. I knew that an hour later he’d be arguing with me about going to bed, but I held on tight and savored the moment anyway.

Do you have a teenager at home? How do you cope? This mama would love to hear your thoughts.