This post is not about the election. It’s about the social media aftermath.

I went to bed last night at my usual 10 p.m., having reached my daily peak of exhaustion. It takes a lot to keep me up any later on a weeknight. A sick child, a gripping movie, a foot-stomping concert? Yes, maybe and perhaps. The presidential election results? Not so much. It’s not that I didn’t care. It’s that I was pretty convinced the guy I didn’t vote for would win and figured the next morning, after a solid eight hours of restful sleep, was soon enough to learn the news.

So what happens? I wake up to find the guy I did vote for won. Say what? I’ll admit I was excited for and proud of our president, and I wanted to share my enthusiasm. But I have a lot of Republicans and/or Romney supporters in my life (including my husband) and didn’t want to rub salt in anyone’s wounds. This is what was in my head when I logged on to my computer to post about Obama’s victory.

What did I find on Facebook? A whole lot of openly hostile as well as passive-aggressive posts from adults, a picture of the Statue of Liberty with her head in her hands, and a post from a teenager saying something to the effect of “at least I know my parents didn’t vote for him.”

So I, the perpetual Pollyanna, post this: “I’m ALWAYS proud to be an American, to have freedoms and choices, and I love ALL my friends and family, regardless of their politics. I’m for keeping Facebook politics free. Anyone with me?” Not a single comment or “like” (at least not yet). I also posted this image of and quote from Thomas Jefferson. 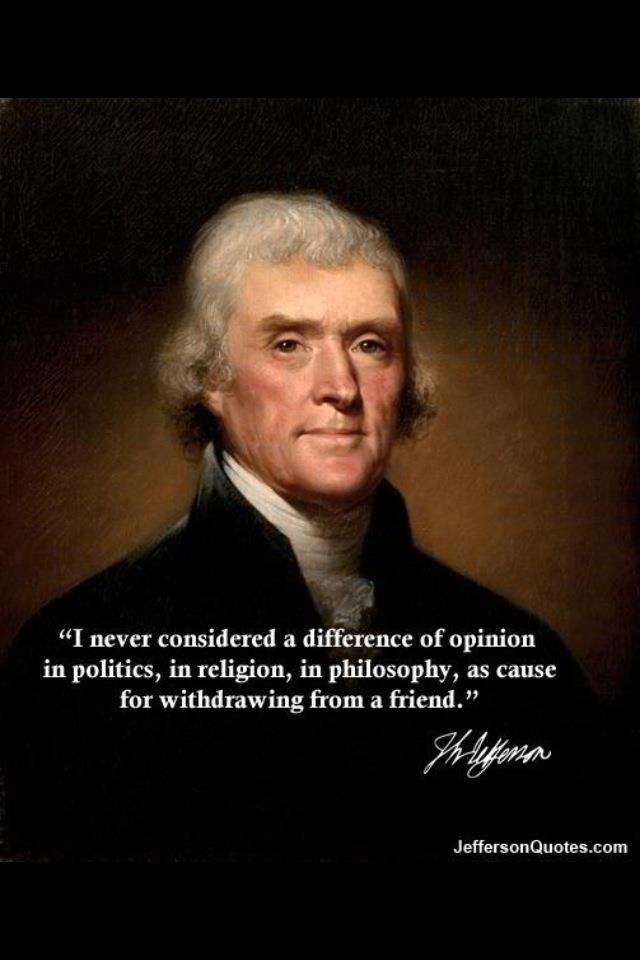 You'd think they would at least listen to Thomas Jefferson (source: JeffersonQuotes.com)

Wow. Four-hundred and fifty-nine Facebook friends and not a single one believes we should stand together as Americans and respect the collective voice of our nation? Now that’s something for the Statue of Liberty to be ashamed of.

And so I ask you, Facebook friends, what do you get out of attacking our president online? I understand that you’re angry, disappointed, frustrated. But is Facebook really the right forum to express those feelings? Will your electronic-courage-fueled posts effect the positive change you claim he is incapable of producing? If you are that angry about the current state of affairs, why don’t you get out there and volunteer, run for office, do something to be the change you want to see in our country?

Whatever you do or don’t do, I would really appreciate it if you stopped clogging my Facebook news feed with your vitriol. I go there for the cute baby pictures.