I remember my aunt and me sitting in lawn chairs next to the swing set, talking and watching my children play. I would jump up every so often to push my preschooler on a swing or guide my toddler up the ladder. My aunt, who raised me in the 1970s, teased me for hovering over my kids. Deep down I knew she was right, but even then I wasn’t good at letting go.

A few years later, on a sweltering summer afternoon, my older sister and I sat in the shade drinking margaritas as my children played in the swing set’s sandbox. They fought over the sieve, the bucket, the shovel. Anything one of them had, the other one wanted. My sister had no kids of her own, and I knew she envied my life. As an overwrought mother just wishing for a little peace, I questioned whether she would want it if she had any idea how hard it was.

Those are two of the memories of our swing set that stand out most in my mind. But there were also hundreds of ordinary days when it was just me there watching my young children, lost in my own thoughts. I wondered when they would stop bickering all the time. I wondered when they would stop needing me so much. I wondered if I was a bad mother for wanting them to. And all the while, I watched the hands of the watch on my wrist, willing them to move a little faster, for things to get a little easier.

Gradually they did. My son started kindergarten; my daughter went to preschool. They made friends at school, and our lives revolved around play dates. When their friends came to our house, my kids remembered the swing set. For an afternoon, it became their fort, hideout or pirate ship again. But once their friends left, it stood alone and neglected; they forgot it until the next visit, and eventually they disregarded it altogether.

When both kids reached middle school, my husband and I spoke casually about getting rid of the swing set. The only use it got was the occasional visit from a relative or friend with young children. We agreed we would look into selling it, but there it stood, both of us too busy to follow through, me not quite ready to let it go.

Last weekend, three days after our oldest child graduated from middle school, my husband arranged for a friend to take the swing set. He didn’t consider the timing, and neither did I — until I saw the vacant spot in our backyard. My son was about to start high school, and all that was left of this fixture of his childhood and my daughter’s was the sand from the sandbox and the memories.

I thought back to those early days spent at the swing set, the special visits with my aunt and sister, and the days on my own, when I felt all the typical frustrations of life as a stay-at-home mom. But as I stood in the yard 10 years later, staring at the empty space where the swing set used to be, all I could remember was my children’s laughter, their sweet faces, my limitless love for them. 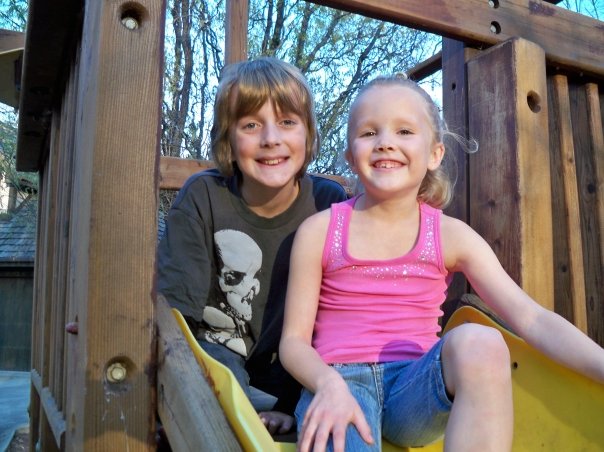 My kids four years ago during a visit from my niece and nephew: Our poor, forgotten swing set was happy to welcome them back.