This morning I dropped off my son for his first day of finals as a high school freshman. I know he cares about his grades, and he says he studied. But how he does is entirely up to him. I can’t take the tests for him. Heck, I would probably bring down his GPA if I attempted the honor’s geometry exam. I can’t talk to the English teacher who he feels is being unfair. Well, I could. But I’m not going to. Sometimes mama bear has to back off. Today is one of those times.

I will admit to having been an overbearing, overprotective, borderline obsessive-compulsive parent when my son was small. He was my first child, I had no idea what I was doing, and my biggest fear was of doing the wrong thing or, worse yet, not doing enough. I anally retentively organized his Lego blocks, dinosaurs and Matchbox cars into labeled bins. Each night, as we cleaned up the playroom, I followed closely behind him, sorting through the toys he carelessly tossed into the wrong bins. I made sure the Spider-Man puzzle wasn’t missing any pieces and all the Imaginext figures were on board their pirate ship. I maintained the order in our little universe because I could and thought I should.

But what if I hadn’t picked up all the pieces and erased every mistake? Would it really have mattered if a Lincoln Log turned up in the Thomas the Tank Engine bin?

I look back and cringe at my perfectionist self in those early years. I micromanaged every aspect of my son’s day based on all the parenting books I read. I knew what to expect when I was expecting, during my son’s first year and when he was a toddler. I kept careful track of his progress, visiting the pediatrician more times than I care to admit when he didn’t fall within the range of what the books described as “normal.” I knew that healthy sleep habits make a happy child — thanks to the similarly titled book by Dr. Marc Weissbluth, which I read multiple times — and I rigidly enforced nap and bed times to the point of turning down playdates and leaving parties early. My parenting bibles gave me a sense of control amid the chaos of the early years of being a first-time mother.

When my son started kindergarten, I redirected my need for control to my own life and went back to work part time. Having a focus outside the house, even though I worked from home, helped me regain my sanity, and I think it also benefited my second child. I enrolled her in preschool five days a week at age 3. In the afternoons, when she was home, I sometimes had to conduct an interview or finish an article. She colored in my office, watched a video or played by herself in her room. My work deadlines kept me from obsessing over missing puzzle pieces or misplaced toys. My daughter was, and is, confident, assertive and independent, and I think that has something to do with me being forced to back off with my mama bear ways.

It’s still there, though, that urge to step in and fix things, especially with my son because I did it for so many years. After I dropped him off this morning, I thought about calling the English teacher with whom he is struggling. Would it be so bad for me to interfere — just a little? Yes, it would. I have to let him try to work out this problem on his own first because soon enough he will be heading off to college, and mama bear isn’t allowed there — or at least shouldn’t be.

Mama bear is backing off today, but that doesn’t mean I’m not worried about my son. It doesn’t mean I don’t love him. It means that I know if I keep cleaning up his messes and erasing his mistakes, he will never learn to do it for himself. Sometimes doing nothing is harder than doing something. Today is one of those times. 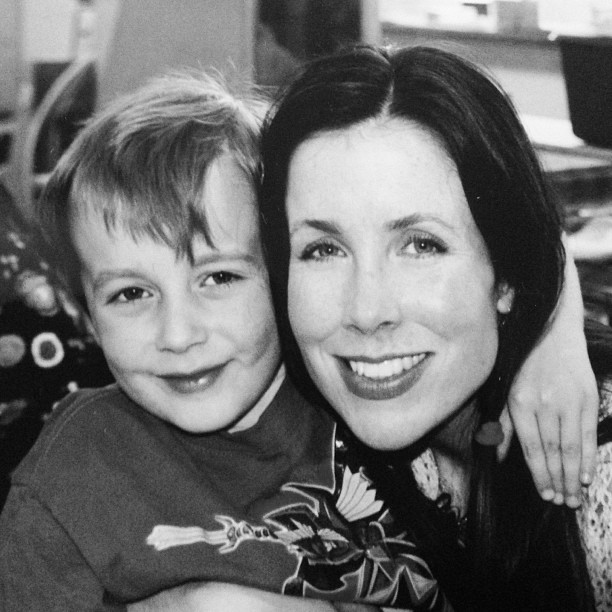 Kindergarten: a simpler time, when mama bear could, and did, fix everything. 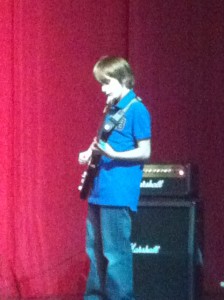 I have received one trophy in my 44 years — for winning the fourth-grade spelling bee at my elementary school. As I wistfully recall, I would have won the school-wide spelling bee too if my nervousness hadn’t gotten the better of me. In the final round, I transposed the letters “u” and “a” in “guard” (I still get a little insecure when I have to write or type that word).

I know it sounds silly, but I’m proud of my trophy. I won it for doing something better than anyone else (well, at least anyone in the fourth grade at my elementary school in Southfield, Michigan). Isn’t that what awards and trophies are supposed to recognize — winning?

This topic came to mind last night at my son’s middle school talent show. At the end of the evening, after about 30 performances, the principal called everyone on stage and started handing out certificates — to all the students. My first thought was, “You have got to be kidding me! These kids sing, dance and otherwise perform their little hearts out, and no one gets to experience the thrill of winning?”

Well, it turned out that I was too hasty in my righteous indignation. There were, after all, ribbons for best solo, group, dance and miscellaneous performances. This, however, is often not the case.

You parents out there know the drill (bad soccer pun not intended). If young Johnny joins a soccer team, he gets a trophy, plaque or ribbon. It doesn’t matter if he actually kicks the ball or just stands out in the field and picks dandelions (the latter is exactly what my son did throughout his short-lived stint as a soccer player). If he’s on the team, he is a winner.

This “everybody wins” mentality is all well and good when you are dealing with young children. Why not delay the agony of defeat until they are able to process it? But preteens see through the pretense — or at least my almost 13-year-old does. In a recent conversation, he wanted to know what the rationalization is for the education system creating a society of mediocrity (I’m paraphrasing, but he did say something similar).

My response to him was that the schools (at least in this case) are not to blame. The fault lies with the “hover parents” who can’t bear to see their children lose. Let’s face the facts here: Losing, like winning, is a part of life. If Mommy calls the teacher to complain because Johnny gets a “D” on his spelling test, is this going to teach Johnny to study better? It’s one thing if he needs extra help with spelling and isn’t getting it. It’s altogether different if he actively chose not to study, and Mommy is calling to “fix” the bad grade for him.

One of the hardest lessons I’ve learned, and continue to learn, as a parent is how to let my children lose. If I fix it every time, will they ever learn to fix it themselves? If their rewards don’t come through their own diligence and hard work, are they rewards at all? Or am I simply prolonging the inevitable — cushioning their egos because it’s too hard for me to watch them fail?

One of my first painful lessons in letting my kids lose came when my son was 8. He tried out for a local swim team and didn’t make the cut. The poor kid was devastated. He’d never participated in an activity where you couldn’t just sign up and be on the team — where everyone wasn’t a winner.

At this point I had two options: I could call the coach to complain and possibly get my son another tryout, or I could let my son fail. I reluctantly chose the latter. But guess what happened? He took a few more months of lessons, worked really hard on his strokes and tried out for the fall season. This time he made the team and he couldn’t have been prouder of himself.

At last night’s talent show, my son and his friends won the miscellaneous category for their improv comedy routine, which was an unexpected victory. They are better known for their talents as violinists, guitarists and singers. Who knew they would be so funny up there?

Sadly, their rock band, The Amish Electricians, did not win the group performance award, although you can clearly see in this video that they rocked the house (yes, I know I’m biased). My son was happy for the talented rap trio who won the ribbon. They deserved it. And I, the non-hover mom, did not corner the judges afterward.

So what do you think? If everyone’s a winner, does anyone really win?