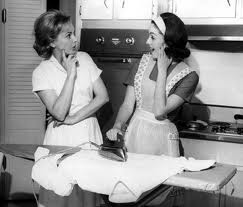 At the risk of sounding like a total dork (believe me, I know it wouldn’t be the first time), Eleanor Roosevelt is one of my heroes. If I were planning a dinner party of famous people I admire, living or dead, she would be sitting right next to my father or possibly Jimi Hendrix. I am quite certain Mrs. Roosevelt would provide some interesting table talk, and I’m guessing she wouldn’t miss a beat when my dad told an off-color joke. I think they would also be able to relate when it comes to Mrs. Roosevelt’s famous quote: “Great minds discuss ideas; average minds discuss events; small minds discuss people.” My dad didn’t have much use for gossips or busybodies either.

My two heroes (sorry, Jimi) came to mind recently when my husband told me some unfortunate news about an acquaintance of ours. I have no plans to repeat it because it’s not my story to tell. Frankly, knowing it makes me feel sad and a little dirty.

I’ve also learned firsthand that gossiping has a tendency to come back to bite you in the butt. I truly believe that if you spread the word about someone else’s misfortune and take even the remotest pleasure in his or her pain, you had better watch your back afterward. It’s called karma, and it’s a bitch.

My own admittedly lame justification for occasional gossip is that I only talk about mean people who do crappy things because they deserve it. I’m not sure what gives me the right to determine their fate, but that is how I rationalize my bad behavior. In my defense, I don’t shout anyone’s story from the rooftop. It typically goes no further than my husband’s ears because it doesn’t occur to me to tell anyone else.

Mrs. Roosevelt would be happy to know that, unlike me, her potential dinner companion (my dad, not Jimi) never spoke ill of anyone, even the people he disliked. I assume he figured their unpleasantness spoke for itself. Plus, he always had great stories and ideas to share, so there wasn’t much room in the conversation for idle chatter about others.

When it comes right down to it, gossip stems from boredom. And, honestly, if you can find enough time to be bored in the juggling act of work, marriage and parenting, I’d like to know your secret. I promise not to tell.