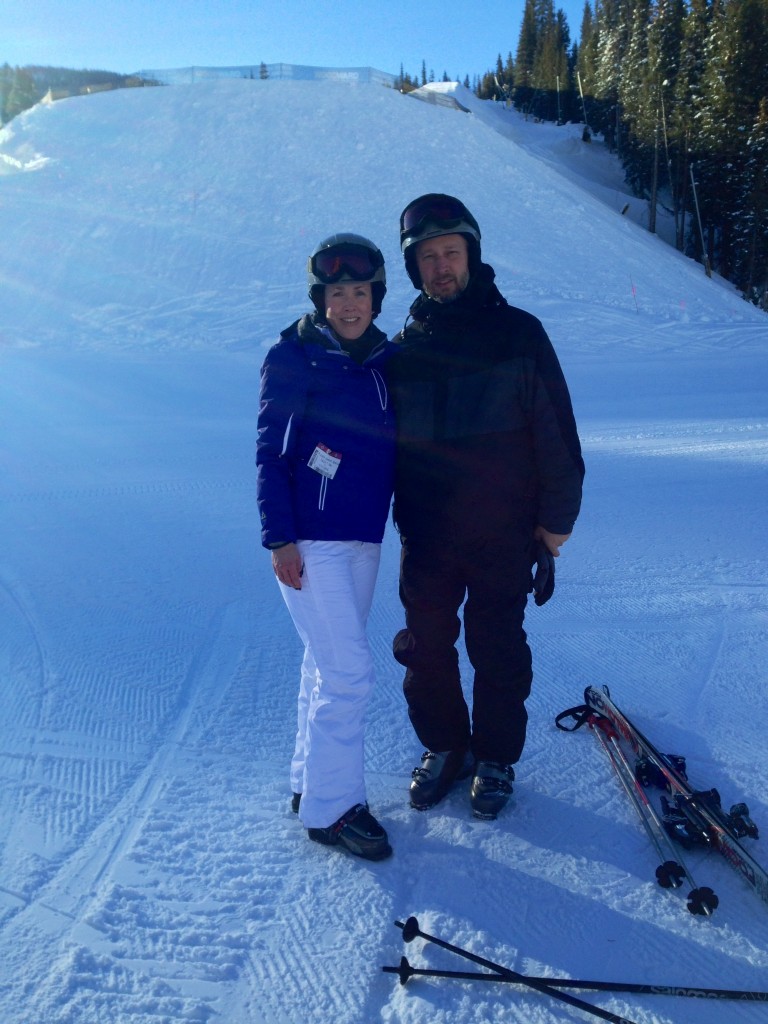 Our first day at Copper Mountain, before I tried to ski. At least I look like I might know what I’m doing.

As I make my way through my forties, I find myself facing a painful fact: I am afraid. I’m not just referring to my lifelong fear of spiders and aversion to clowns. Now I am afraid of lots of things. Things like amusement park rides, fast-moving vehicles, small planes, narrow bridges, coastal highways and mountain roads. Things that never bothered me in my twenties, when I stubbornly embraced my own invincibility, terrify me in middle age, and all I can wonder is: What happened?

It’s not as if I never confronted mortality, made life-changing decisions or experienced pain or loss in my twenties or thirties. The difference at age 46 is that fear, especially of physically dangerous situations, can be paralyzing.

I discovered this last weekend during a ski trip to Colorado with friends. My family had skied once before, several years ago in Wisconsin, but we figured we needed a refresher course to tackle the long, winding runs of Copper Mountain. After a two-hour group lesson, my husband and kids were ready to move on to more difficult green (beginner) runs. I, however, couldn’t get down Roundabout, the easiest green at Copper, without falling. My family took off for the Lumberjack lift, but the instructor sensed my fear and lack of confidence and suggested I stick to Roundabout for a few more runs.

The thought of skiing alone terrified me. What if I fell again? What if I crashed into someone? What if I broke a leg or hit my head? What if I wound up paralyzed and couldn’t take care of my family? A twentysomething would never entertain such crazy thoughts, but for a middle-aged mother they all seemed to be possible, if not likely, outcomes. After standing by the lift for an hour, watching preschoolers zip by and imagining myself rolling down the mountain in a giant snowball like a cartoon character, I gave up and went back to the condo.

The next day, my husband encouraged me to try again. He said he would ski Roundabout with me once or twice before joining our kids and friends. I agreed, knowing that at least I wouldn’t be on my own if something went wrong. I managed to get halfway down the gradually declining slope, but when it steepened slightly toward the end, I veered out of control and fell. I sat there, shaken and crying, unable to get up. I finally took off my skis and made the walk of shame to the bottom of the hill, where my ever-supportive husband waited for me. He gave me a reassuring hug, but I felt like a failure.

As I rode the shuttle bus back to the condo, I wondered what happened to fearless me, the girl who rode in fast cars with bad boys, smoked cigarettes, drank Jägermeister shots and danced all night at punk clubs in inner-city Detroit. Apparently, she had turned into a fearful middle-aged mess.

Frustrated and ashamed of myself, I thought about what our friends who ski would say, especially the ones who were with us on the trip. Would they consider me a coward or a loser? At 26, the peer pressure of the situation would have been enough to force me back on the lift. But at 46, I didn’t care and let myself give in to the fear. Was that really so bad? Wasn’t it worse to do something that scares you because you are afraid of what others will think than not to do it because you know yourself well enough to realize you aren’t ready?

When I got back to the condo, I booked a beginner group lesson for our next ski day. While my husband and children moved on to the blue (intermediate) runs and our friends skied the black (advanced) slopes, I would be on the bunny hill with a group of adults who didn’t know how to put on their skis. And that was exactly where I wanted, and needed, to be.

During my lesson at Green Acres, Copper’s beginner area, I realized that although my fearfulness might slow me down, I didn’t have to let it stop me. I skied at my own pace and found a buddy, Kim. We rode the lift and navigated the bunny hill together, laughing at our missteps (when I fell off the ski lift, for example) and cheering for each other when we made it down the hill without falling. At the end of the half-day lesson, our instructor, an oddball retiree ski bum named Lyle who teased us for sticking out our butts while skiing, said we were both ready to take the Kokomo lift to Roundabout. And he was right. 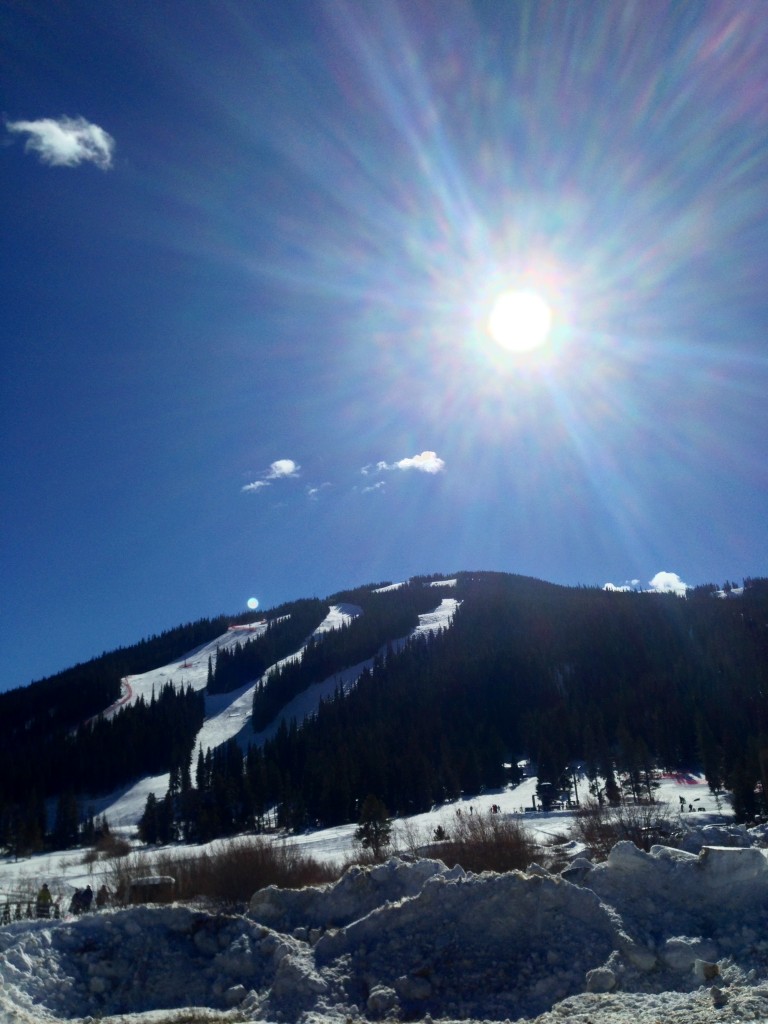 The view from the top of the bunny hill at Green Acres, Copper Mountain’s beginner area

After lunch, my husband and daughter agreed to forgo the blue runs for a while and head over to Kokomo. I felt nervous about trying to ski Roundabout again, but I knew I could do it. The first part of the run went smoothly. I maintained control, relaxed a little and enjoyed it. When the slope steepened slightly, my confidence waivered as it had the previous time. But instead of deliberately falling and giving up, I kept going. I ended up on my butt again, but I got up and finished the run, which felt like a victory to middle-aged me.

I guess what happened to me over the past 20 years or so is that I learned to be cautious. My safety, my health, my continued existence matter to three important people: my husband and children. I may be more fearful in my forties, but it’s only because I have so much more to lose. Being over the hill doesn’t mean you can’t make it down the hill. It just might take you a little longer to get there. 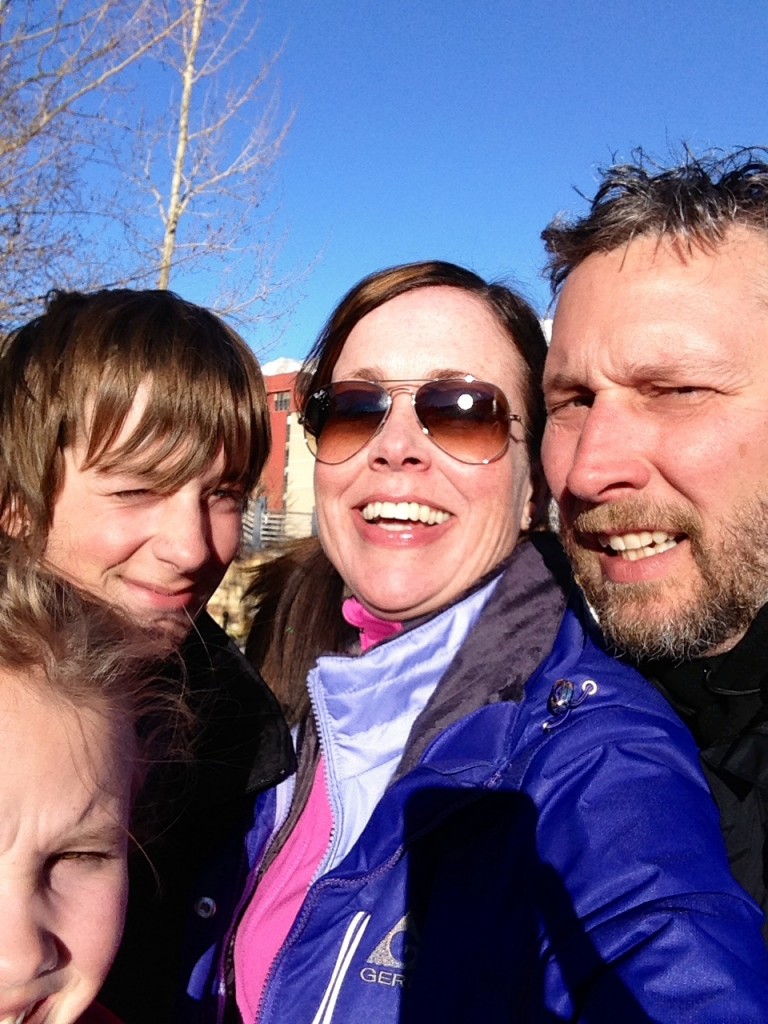 After I finally skied a green run without freaking out. This one deserves an awkward family photo award, doesn’t it?