I don’t remember my first time, but by high school I was doing it pretty much daily. I was underage, I knew I could get in trouble, and sometimes I did. But I didn’t care. The risk and danger were part of the appeal. I was a teenage rebel without a clue, and I thought smoking was cool. The ignorance and arrogance of youth excused my behavior. I told myself I’d quit when I was older. It was no big deal because I wouldn’t do it forever. 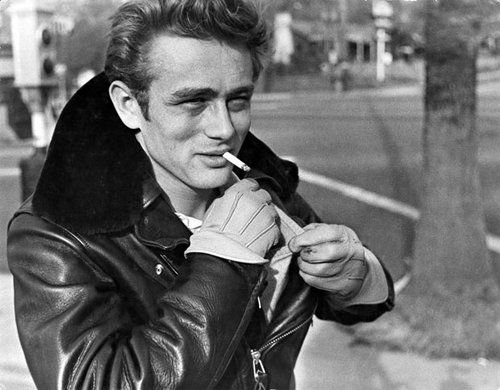 James Dean made it look so cool.

Yet, here I am, a 45-year-old mother of two justifying inhaling toxins into my body and risking lung cancer by saying “I only do it on the weekends” or “I don’t smoke around my kids.” I know I’m deluding myself. I can’t rationalize shaving years off my life in the name of instant gratification and a nicotine buzz. I no longer have the years to waste.

It’s not that I haven’t tried to cut back or quit over the years. In fact, it was easy to stay smoke-free during both my pregnancies. The smell of smoke nauseated me, and I had my unborn children’s health to protect. But after my babies were born, and only my own health was in question, smoking became my secret vice, my mother’s little helper. I’d sneak a smoke while the kids were napping or slip outside after dinner while my husband was playing with them in the living room. It was my own unhealthy version of “me time,” a twisted yet comforting way of staying attached to my pre-mom self by indulging in an old, familiar vice.

When I started running five years ago, I shifted to more of a social smoker, lighting up only after a few cocktails when I was with friends who smoked. The intense training schedules of long distance races made puffing on a cig less desirable, but I never managed to pack away the ashtray for good.

During stressful times, smoking is like the bad boy I couldn’t stop dating in my twenties: I know it’s wrong for me, but I can’t seem to help myself. I’m addicted to the ritual: lighting the cigarette, inhaling the smoke, even stamping out the butt. Whenever I’m around someone who’s smoking, the urge and nostalgia envelop me. Before I can consider the consequences, I’m doing it again.

I hope things will be different this time, though. After a particularly bleak year, when I started buying packs of cigarettes and smoking more than socially, I think I’m finally ready to end this dysfunctional relationship. In a snap but sober decision on New Year’s Eve day, I signed up for the 2013 Chicago Half Marathon. After wimping out of what would have been my second Chicago Marathon last year, I thought I was done racing. But it’s a new year, and things seem a lot brighter. I think I have at least one more race in me, and I’m excited to get healthy and start training for a new personal best time.

I know I can quit smoking; I did it twice for nine months. But this time I’m doing it for me. Sometimes quitters do win.

Happy New Year, peeps! I missed you over the past two weeks but enjoyed a fun, relaxing holiday break with my family. I hope you did the same.